I don’t know how to do this…

So, if you didn’t see my previous post – you can check it HERE.

But essentially, I fucked up. When I sent out my review copies of Never Give Up, I did NOT include an itemized trigger warning page. I put in a general content warning. (Screenshots below). I should have put the full list. When I found out that readers were thinking it didn’t have a full list for the book… I needed to fix it. I wanted to make sure that they knew I did not do anything intentionally to harm my reviewers, and that I would make sure moving forward, all reviewers received the full list of trigger warnings that would appear in the final copy of the book.

What you’re going to see below is all of the chaos that happened after… culminating in someone sending me a disturbing message insinuating that I should kill myself. (Screenshot included toward the bottom of this post).

Friday : 11:43am – sent video #1 addressing a review that specifically mentioned a trigger warning. (I’ve blacked out the name and covered any faces in screenshot because I don’t want to invade reader space) <- sender wanted to be left out of it for not wanting to start or be involved with drama (completely respect that) so all of their contact information is blacked out and I will NEVER divulge who sent it – at that point, I was not going to address this review specifically whatsoever, because I was blocked from the video and it said unavailable.

Friday after that : I don’t have a screenshot of it because it was sent via Snapchat and honestly it wasn’t a thought to get a screenshot – I was sent the video of someone stitching the original video talking about trigger warnings. I was on the phone with another author and said “I have to address this hold on” and recorded a video.

Friday : 2:00pm I posted my video to TT showing the trigger warnings and engaged with everyone I saw who commented on it – making sure that everyone was told that I never intended to disrespect my review readers at all and that I am going to do better. (Screenshot showing the download that TT automatically saved in my phone of the original video)

Friday at 5:31pm I even tried to message one of them to thank them again for their candor and how their comment hit right where it should, because I didn’t even know I needed it to. It never sent because AS I WAS sending the message… I was blocked (screenshot showing the time and content of my message to them) 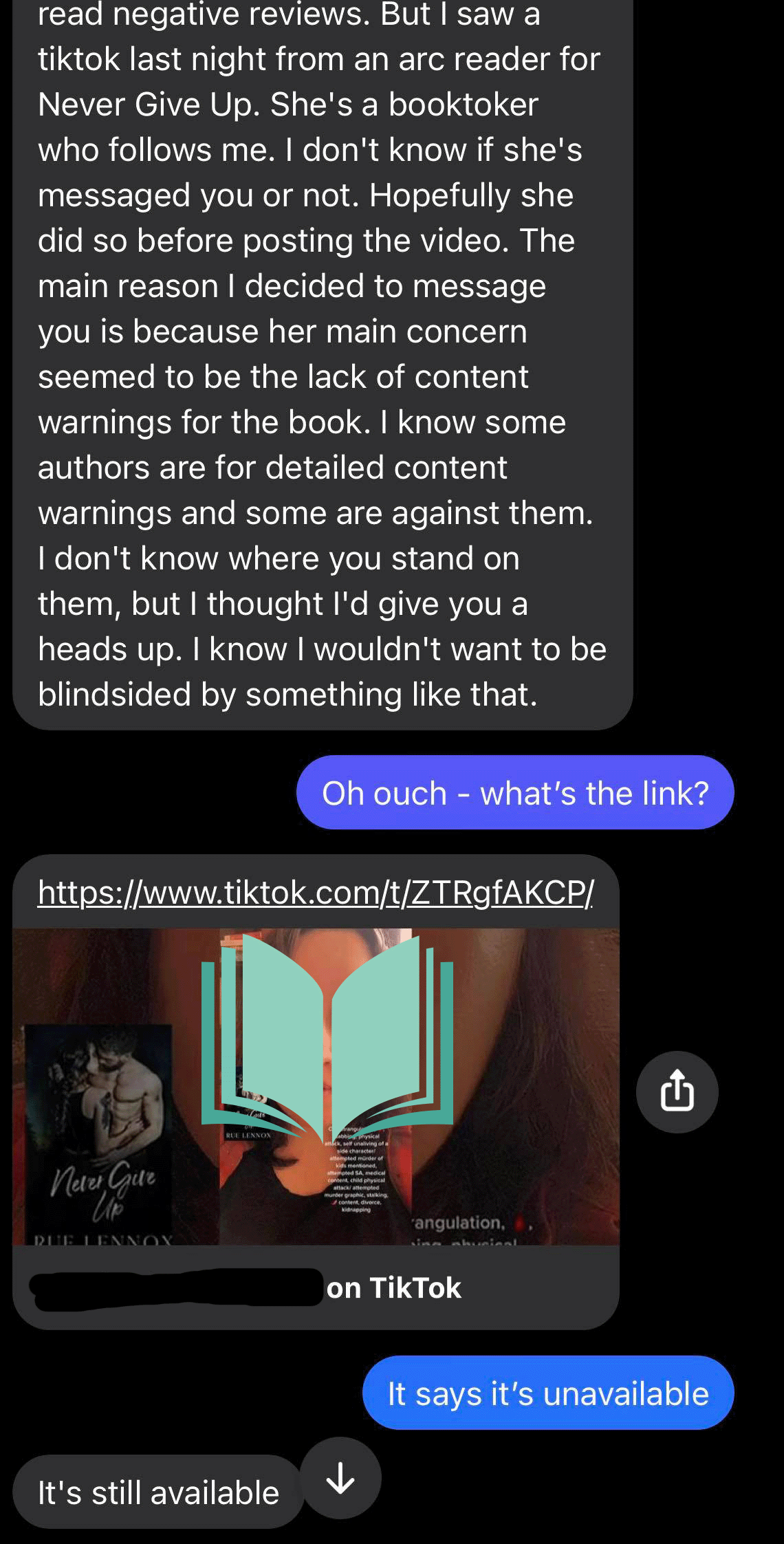 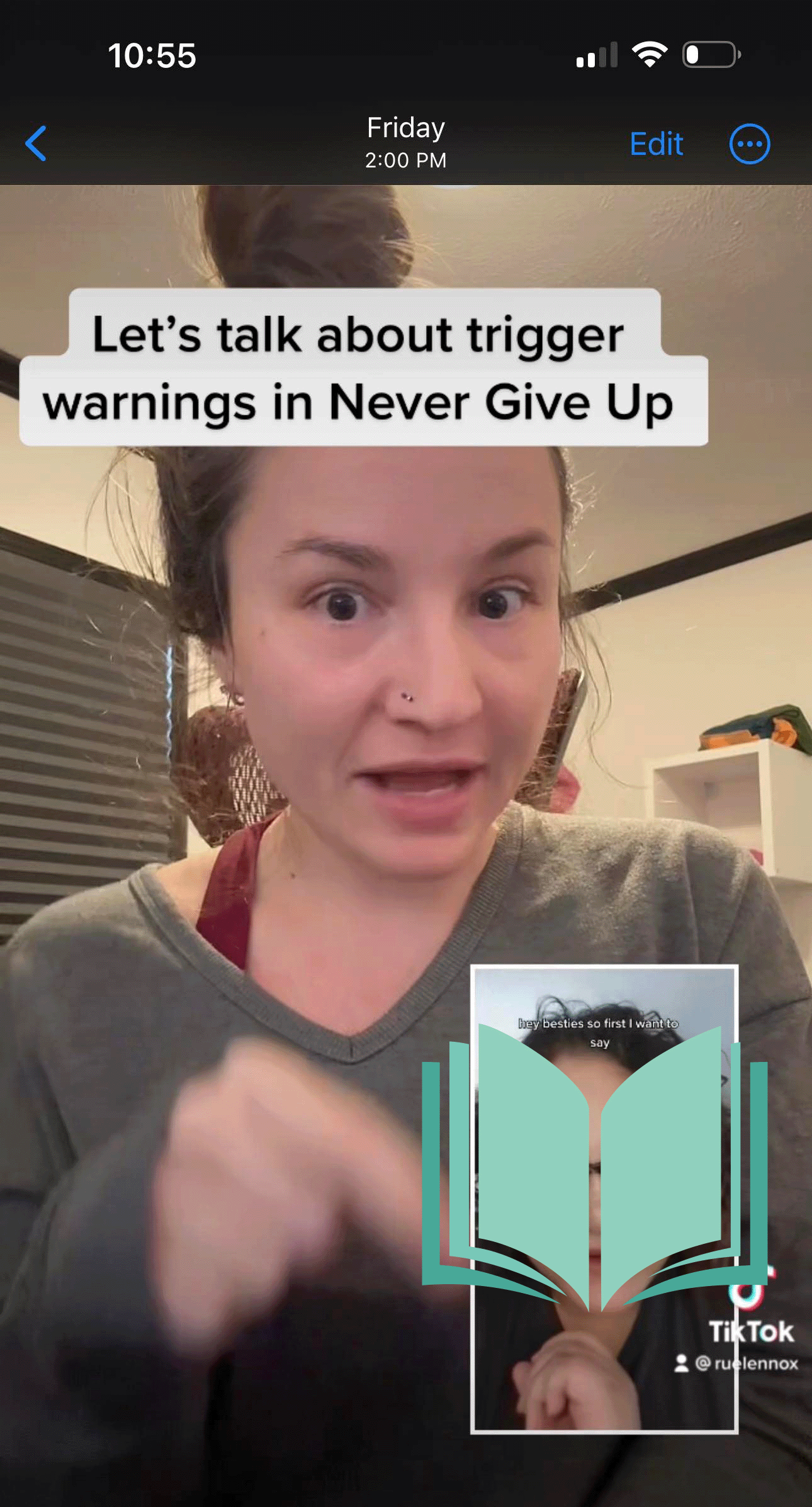 I got off the phone at that point to attend a benefit dinner that started at 5:30 pm (I was late) for a friend of mine IRL who is battling breast cancer. And was there until just before 10 pm.
When I got home, and back on the phone, my TT video had been removed. Anyone between 5:31 pm and when it was removed who commented – I did not see or get a chance to engage with. I want to make it very clear — I have NOT gone looking for content/videos/anything related to this at all. Any information I have been told is being told to me from third parties. The screenshot below is of my video removal, which is still sitting in pending review as of the time of this blog creation on 1.17.23.

On Saturday morning, I posted to my USUAL social media platforms (I use TT to make videos about books and that’s it – nothing serious or venting at all)

AND on those platforms, I apologized to my review readers. I have a review group, a fan group, and a business page – that received the post. These readers, many of them have been with me since I started publishing in 2016. They’ve stood by me through genre changes, pen name changes, and the suicide of two of my siblings. They’ve become so much more than JUST reviewers. So the thought that my actions in not including them with the full trigger warning might have hurt them… was devastating. (This apology is covered in depth in my previous blog post… again you can find it HERE). I am including the screenshots of my message to readers as well as the content warning and trigger warnings mentioned just for the sake of transparency. 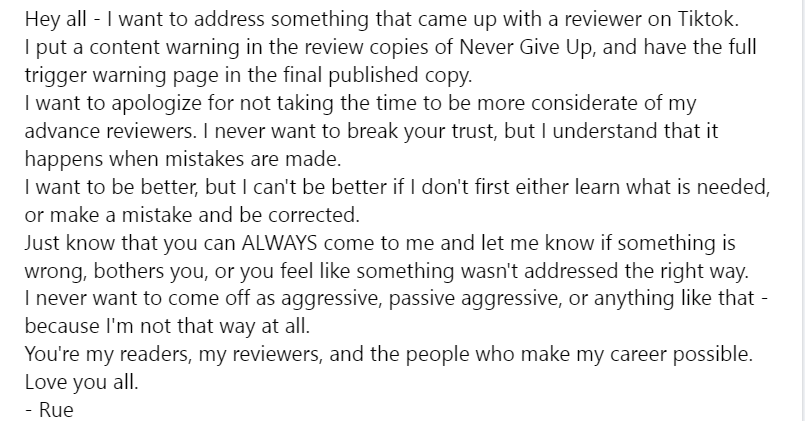 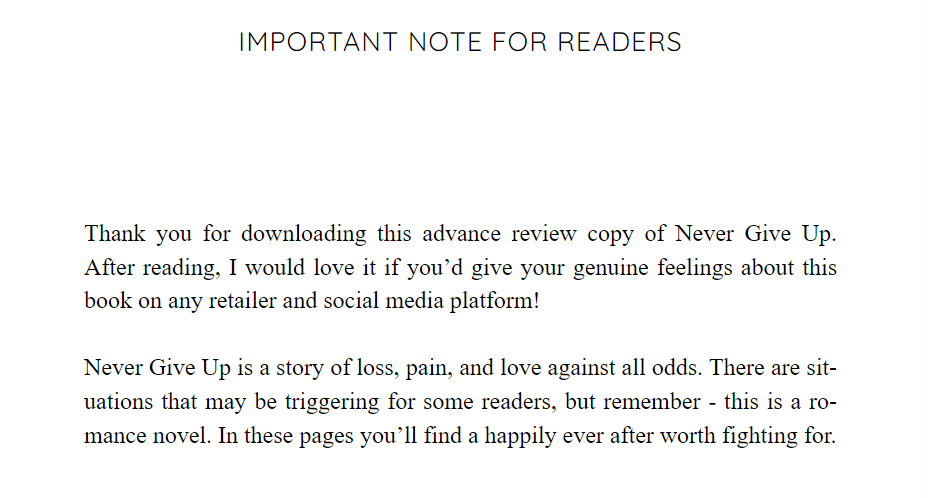 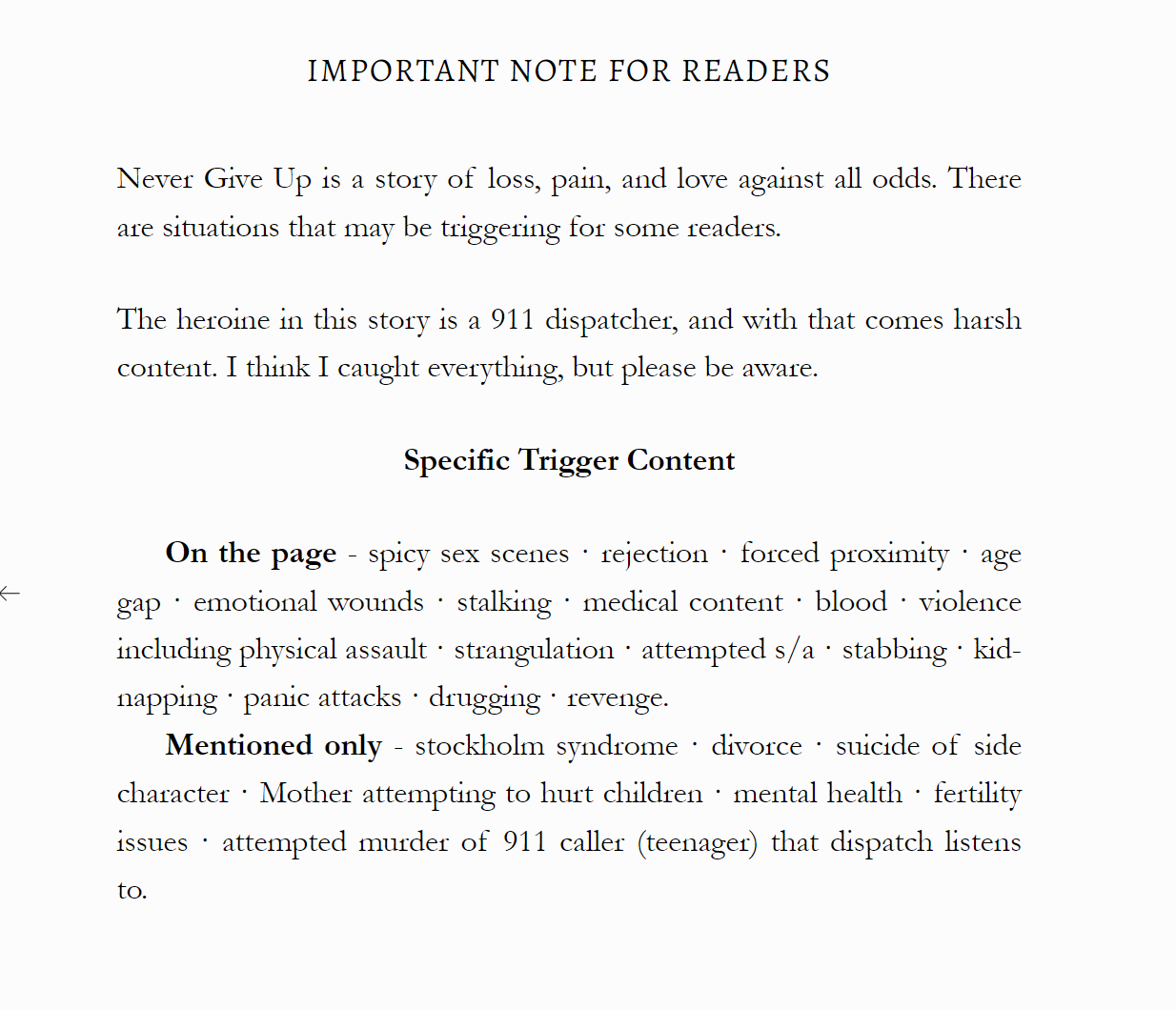 Instagram and TT were cross-posted to later that night after spending the day with IRL friends and getting their opinions, and then driving home in very bad weather conditions… the posts were then posted HESITANTLY because some of the comments on my video and what I’d learned on Friday was to respect reader space and not invade. But I decided to make the same post there again to be transparent and accountable to readers and to my brand. Owning my mistake. Apologizing to my reviewers. Letting them know that I will do better.

No excuses. Nothing. Literally —- I want to do better, and this is going to help me learn how to engage with my reviewers moving forward. With my readers.

I could make excuses about how I have not published at all in 2022. How I’ve been rebuilding my brand and focusing on my family healing after losing multiple members due to suicide and drugs and death in the last 12 months. I did not. I owe readers more than that. I owe them my accountability. So I stand by the fact that there is no excuse. I made a mistake and it will not happen again.

After that, I made sure to engage with everyone who commented on my post, in my space. I did not go out seeking anyone at all. I’ve intentionally avoided Tiktok except to check my notifications so that I could engage in MY SPACE. On my post.

On 1.16.23, at 9:54 pm I received a message that will be the screenshot below. Someone telling me that I should take myself out of the world. I have no words.

If you’ve made it this far… You should know that about 99% of the content in this blog post was put on my TikTok in the form of photos, including screenshots. And my post was removed for violating community guidelines.

I owned my mistake. I should have included a complete list of trigger warnings for my advance reviewers. I did not. Moving forward, I will make sure that I do.